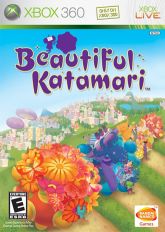 When people first heard of the crazy Japanese idea of a little guy rolling a ball around, many found it quite silly and childish. For several years it was confined to the PS systems, this year, however, it escaped from the clutches of the Sony enterprise and joined up on the Xbox 360.

Beautiful Katamari was quite unexpected, when I played it, I had no idea that it would flow naturally on the 360. The controls were really made to fit the 360, though really awkward at first. It’s childish, but in a way that’s fun but not harmful. I, myself, am not embarrassed to say that I loved the game. Racing to pick up every item in the world was a challenge to beat the clock and make the biggest ball of crap ever seen. It’s techno music really helped out the levels and added to it’s replayability. Games shouldn’t be put down on the assumption that it looks too childish. If you think that, you are missing out on quite a few games.