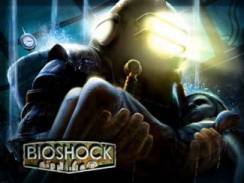 A man…has a choice. I chose…BioShock.
Welcome to Rapture. The underwater thriller is near-perfect from start-to-finish, and has everything that a good game needs: graphics, a story, and gameplay. The controls are flawless, the Plasmid system is awesome (with nice controls to go with it), and the story is probably the best I’ve seen in a game…ever. You start off on a plane (for a few seconds), only to have it crash (why did it crash? that’s for the player to decide…). You are dying in the water, near-drowning, and need something to save you, and quick- there, in the corner! That lighthouse!

You enter…but who would have expected a gateway to something as horrible as Rapture?

While BioShock may have been a cinematic perfection, it had its flaws. The game was too easy and too short for my liking, but that puts hardly the dent in this masterpiece.

If you would like to know more about BioShock, please read my review.