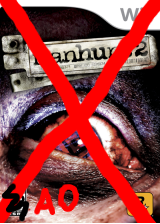 Manhunt 2, Rockstar Games’ (of Grand Theft Auto fame) murder sim, has reportedly received an “Adults-Only” rating in the States, followed up by being outlawed in the United Kingdom. Ouch.This comes out of much controversy with Jack Thompson and such, and things don’t look so bright regarding the game. When the target crowd for video games is teens to twenties, outlawing people under 18 from playing the game only points the game in a dark direction, and missing out on an entire country might hurt quite a bit, too. Walmart won’t even sell “M” games, and most chains don’t hold “AO”, either: missing out on Walmart sales is definitely not good. Rockstar can (and probably will) appeal the ESRB’s decision, but it’s not likely to get overturned. The ratings body that banned it in the United Kingdom is the BBFC, whose decision thoroughly annoyed Rockstar. So, all of you hoping to get your murder on and get a mature game on the Wii…not just yet.