If you have played Section 8 before, you might remember how the game was kind of fun but had flaws in execution (specifically game mechanics and balance). Hopefully, this isn’t the case with Prejudice, right? Right?

Before we start, I do want to apologize for the lack of gameplay screenshots. I would have some, but I was clenching the controller so tight, I never got a chance to take any. Let’s get started!

The main improvement from Section 8 would probably be the Dynamic Combat Missions (DCMs). If you don’t remember what they were, it was basically an attempt to throw in another game mode during a firefight. A great example of a DCM is: “HAY GUYS. YOU NEED TO GO SAVE THE KING AND CAMP FOR LIKE 15 MINUTES WHILE THE ENEMIES HAVE INFINITE AIR STRIKES, PLEASE IGNORE THE FACT YOU ARE ACTUALLY IN A FIREFIGHT AND ARE HAVING FUN, GO DO MY LUDICROUS MISSION RIGHT NOW.” Fortunately, this has improved quite a bit. DCMs are no longer as important as they used to be, they do not take up to seven minutes to complete, and they aren’t constantly smeared in your face. They’re still frivolous, but they aren’t annoying.

Multiplayer is a blast to play and currently features two modes, Conquest and Swarm. I haven’t played Swarm yet but it looks like Monday Night Combat’s Blitz mode. So everything here on out is about Conquest unless stated otherwise. There’s about five or so maps and each game can have up to 30 people. Unfortunately, the team balancer doesn’t work fairly well, so unless a game has bots on (which are actually decent fighters), games can end up one-sided (it doesn’t ruin the fun that much).

Speaking of balance, the guns are fairly balanced, with my biggest complaint being the shotgun. Specifically, the shotgun that shoots fire ( Apparently, you can unlock it via natural progression but it still doesn’t make up for the fact that it’s overpowered) does a ton of damage and leaves a huge flame spread everywhere. It’s annoying and unfair.

With that out of the way, I want to talk about controls. Maybe it’s just me, but it feels like with the Xbox controller, the game is a tad less responsive than usual (yes, I play with a 360 controller. And no, that doesn’t make me terrible. As of writing I’m in the top 15 worldwide). I stopped playing because my hands and wrists were sore (a first).

Speaking of controllers: Why does A have to be exclusively set to “use”? It’s a context sensitive button. Why can’t we have jumping and flying for that button as well and then use the other bumper for other tech? I cannot tell you how many times I’ve ran into wanting to throw a grenade only to find out my heal beacon is selected, thus I heal myself and die (plus since we only have two equipment items, doesn’t this make a bit of sense? It’s way easier than constantly switching using the dpad).

While I’m throwing random images around, I might as well show this: what’s up with the UI sliders here? 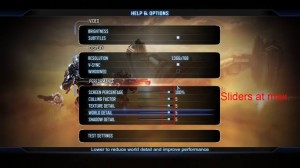 My other complaint is the extremely long wait time at the end of a match. Seriously, you wait about 45 seconds for the next round to start, with ten seconds for loading, plus an additional 15 so that everyone can be ready and another five before the game starts. WHAT’S WITH THE DELAYS, TIMEGATE?! EH? ARE YOU TIGHTENING UP THE GRAPHICS ON LEVEL THREE? IS THAT YOUR ISSUE? I assume they’ll patch it. Hopefully.

Lastly, I want to talk about the campaign. The campaign is a huge improvement from the one in Section 8. There’s an actual tutorial level that sets up the story a bit, but it never really improves from there. The characters are shallow and forgettable (even by other characters!), the objectives are rather bland (HACK A CONSOLE FOR THE 80 BILLIONTH TIME) and the story leads up to one central boss fight which is actually pretty cool but the fight is so short, it’s almost worthless having it (you beat him by putting a clip into him and then ripping off a part of his armor).

I didn’t play Hard mode, so I can’t tell if the difficulty really increases, but come on, Stormtroopers are better than these guys (near the end, I kept running into enemies getting stuck in places they shouldn’t be). The only times I had to reload from a save were because I couldn’t see through the particle shitstorm (pardon my french) that the bridge had collapsed. Or the fact that lava is an instant kill, even if it barely touches you.

Also the prerendered cutscenes look terrible. I’m sorry, but they have the picture quality of watching something from 2003. When I watch them, I feel like I’m playing Jedi Academy or something (the final cutscene is the major offender here). They look so forced and lifeless that it actually subtracts from the game.

That said, Section 8: Prejudice is worth a look. At least get the demo, because it is rather fun (and a huge improvement from Section 8). The game is easily accessible, has a lot of depth for its price, and Prejudice is a great game to play whenever (it’s also ready for LAN games).