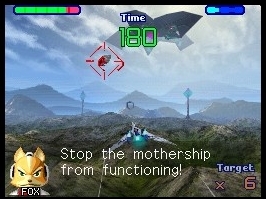 For the rumble park. Star Fox Command, the DS version which goes back to the N64 starfox roots is coming to japan in less than a month. And for fun, Nintendo has released a few facts to the public.

As said before, players who own the DS will be able to use it with the game as they are playing. StarFox will feature 30+ stages which are set in deserts, space, oceans, and lava….places. It is also confirmed that there will be quite a few pilots from the previous Star Fox games, each with their own special abilities.

The game will support Wi-Fi and wireless offline gaming (WiLan). Star Fox Command is set to launch in Japan on August 3 and will cost about $41.50.

The American version is predicted to come out around August 28.