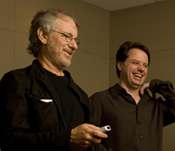 It turns out that Spielberg loves video games, as he noted, “I am a gamer myself and game development has always intrigued me”. Turns out that he will be writing 3 new storylines for untitled games that will release sometime in the future.

The first game is going to be a Wii exclusive and will be using the WiiMote’s motion capabilities a lot. From what we were told it sounds like they made some sort of WarioWare game involving blocks. It will feature multi-player, co-op and of course, single player. Players will also “use the Wii remote to build your own fun games and structures or turn the same Wii remote into a destructive tool to bring them crashing down.”

The second game is an action-packed adventure that takes you on an emotional epic quest where your actions change the story. “The game focuses on a touching and ever-changing relationship between you and a mysterious female character who holds the key to many futures”. In real life terms, this means that the game is a mix between Final Fantasy, Fable, and Tales of Symphonia. According to EA, the game will only be for the PC, Xbox 360 and the PS3.

EA didn’t reveal the last game to anyone as of yet, but we will watch over them and let you know if we hear anything from them soon.