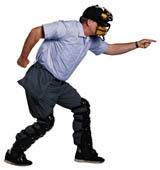 In what is probably going to be the final straw for Manhunt 2 (after receiving an “Adults-Only” rating in the States, and being banned in the UK), IFCO has banned Manhunt 2 in Ireland due to a violation of the Video Recordings Act of 1989 which states that “acts of gross violence or cruelty (including mutilation and torture)” will not be allowed for sale or rental.

Manhunt 2 now has a history of being banned in two countries, and being 18+ in the US. And it was on the Wii? Now both Sony and Nintendo will NOT license the game if it maintains its Adults Only rating.
So, Rockstar can edit the game (however now that it’s set for release, it would cost a lot of money [and time] to fix), or give up on it.