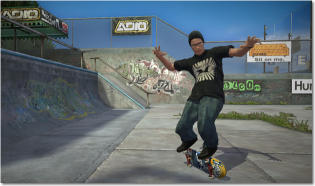 Here we go again with a new Tony Hawk game. This is his 10th game and it’s still like other Tony Hawk games. Like American Skateland, Project 8 has Tony looking for a new skate team of 8 skaters. And you are “the rising one” which makes the game sound mythical. The game still has weird goals and sometimes, challenging events. You are in a leader board. Depending on how well you do in an event, your rank rises up and you become closer to pros.

The game’s graphics are not bad for a Tony Hawk Game. They are also not superb. I can’t complain. However, I do like how all the areas of the world flow into each other and how there is absolutely no load times in between worlds. And the level design was incredibly nice. Big and great to roam around in, and very hard to get lost in. Activision has also lowered the amount of product advertising. The only real ads I noticed were ones for Nokia.

The game can go extremely off topic by showing you ads for a golf video that will improve your swing. Of course the video isn’t real but how does this flow with skateboarding? I have no idea. The music isn’t that great either. Metal? No way. And I couldn’t say much for the sound. It’s really no different from any other Tony Hawk game. It seems like Activision just stuck to it’s roots of what it knows works well with Tony Hawk games.

However, Activision added a really cool new feature to the game. It’s called Learn the Trick, it’s where you actually…wait for it…learn the trick…what a surprise! Anyway, Learn the Trick is a great idea but you can’t master the trick in one try. It takes multiple tries. And the game insults you if you mess up. It’s not very helpful. And the game can be very frustrating in general. Almost to the point where you will either:

A) Scream at the game

C) Take a break from beating the game 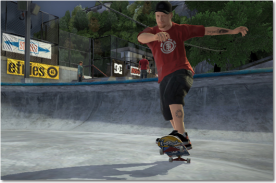 One goal I am stuck on is where I am given 4:30 on the clock and I have to complete 5 events in a small space. The events are quite easy..except..one…where I have to nail a 50,000 point combo. All I got was 25,000 and then I died. It’s hard because unlike other Tony Hawk games, you can’t buy new stats. You “earn them” but the game never reveals what you have to do to get them. You just get them as you go along. Also, you can “steal” money from other skaters..but then they will chase you. I found that it is easier not to be caught by getting off your board and then jumping onto a high wall (By the way, something the game doesn’t tell you but is extremely helpful in the Xbox 360 version is that you can climb walls and hang from edges by pressing the RB button)
So to the ratings:

Sound: 7/10 -The music isn’t that great, just a bunch of metal. And the sound has barely changed from other Tony Hawk Games
Graphics: 8/10 – Nothing to really complain about. The worlds are nice though.
Controls: 7/10 – Controls are fine. I really wish that it could at least give a picture when you first start career mode that shows the controls rather then forcing you into a very hard tutorial for a beginner.
Playback: 6.8/10 -I thought this game had good playback but was too frustrating. Watching out for skaters who try to run into you is pretty annoying in the skate park.
Improvement: 7.8/10 -Almost no real improvement. Other then the fact that you can move from place to place without having to have loading screens. And a new feature called learn the trick.
Overall Score: 7.8/10 – Not much changed. Good game, but I personally would not continuously play it.

Rating Match!
Someone else who frequently plays Tony Hawk games played the game with me. He says that Project 8 is more difficult then previous Tony Hawk games but he loves what Activision added to the game and he would rate it a 8.5. He didn’t like the the music either.