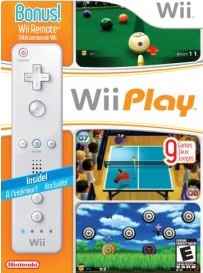 Wii Play, the sequel to Wii Sports will be coming out on Feburary 12th 2007 and will contain 9 brand new mini-games that you can get addicted on. So let’s list this thing!:

Wii Play debuts in a little more then 2 weeks and if you liked the bundled WiiSports that came with your Wii, then you will most likely like Wii Play.