Soldier? More like cannon fodder. The 222nd, Bad Company, is the “expendable” portion of the military made up of the leftovers and troublemakers that the Army bunches together rather than throw them into prison. It has the highest mortality rate of the whole army. 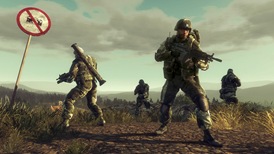 Which explains why the the division is only made up of three rejects (You [Preston Marlowe], Haggard, Sweetwater) and a Sergeant (Redford) who rather go fishing. The game opens with some wisecrack jokes and some great humor (a reoccurring theme in this game). After you are introduced to everyone, you hop on a truck and ride off to your next position. Redford proceeds to tell you everyone’s backstories. Haggard, the not so bright demolition expert, got transferred to B-Company because he blew up an army ammo cache and the officer’s latrine, Sweetwater was “promoted” to the position because he uploaded a virus into the military’s secure network and Redford was transferred when he made a deal with the army to have his term shortened in turn of leading B-Company.

So you’re driving down the road, with a helicopter that flies over you head going the opposite direction and Sweetwater starts to get tense. Suddenly, the whole area gets bombarded, and DICE gives you a first look at the explosive power of the Frostbite engine, which allows 90% of the terrain to be destructible.

Oh wait, you aren’t dead. Just sleeping/fainted. The game takes this opportunity to teach you the basics as a series of “Are you okay? Look up. Look Down. Shoot those Barrels. Bounce Around. Duck. Make me a sandwich.” Maybe that last one was improvised.

Well, to put it in one word, fun. This game makes sure you have a good time playing it. The humor fits the situation and rarely feels forced. The game wants you to blow stuff up. Make a mess, they don’t care, they will probably be dead anyways. Run in, guns blazing, blow up everything. While the list of levels are short, they are very large and free roaming. And the game gives you a list of collectibles (guns) and gold bars, which are like the Halo 3 skulls. Everyone is getting tired of the army, until they find their first gold bar.

“Wars are fought for a number of reasons, and sometimes, if the one they gave you isn’t good enough, you might need to find your own”

From there on, we pretty much carry out A-Team style in the most bad ass way. The game doesn’t require you to find your own medic in single player, nor does it require you to heal your teammates (who are invincible). Enemy AI is decent, player AI is pretty strong, but unless I missed something, I haven’t really found them actually killing the other guys (normally I do it before they can).

I think my favorite parts of Single Player was blowing stuff up, the locations, the characters, and the dialog. The story was great, too, but DICE gave away some of it already during their advertising. So you can pretty much figure out what happens up until you get the first gold bar.

Out of the box, there is only one multiplayer gametype, Gold Rush. Gold Rush is like one flag CTF with two teams; Attackers and Defenders. Attackers have limited respawns and can get more by destroying gold crates by either arming a crate or just shooting at it. The Defenders have to protect the crates by taking out the Attackers and defusing the bombs placed on the crates. If the all the crates are destroyed the Attackers win, if the attackers respawn bar is completely depleted, the Defenders win.

DICE recently released a Conquest mode, which I’m not a huge fan of. Basically, get more CPs than the other team to win.

All your stats are available online, with the exception of how much more EXP it takes until you rank up. As you rank up, you receive credits which you can buy new guns with.

“Now that’s what I call an explosion!”

The graphics in this game are great, they are very detailed, from far away and up close. The music fits perfectly with this game. It doesn’t suddenly break out into techno while you are trying to sneak into a base or something. Explosions are really explosions, not some crappy blast. If you want boom, they got it. The multiplayer maps are very nice and open with quite a few places for cover. It’s fun.

It’s not all perfect. The game has a few bugs that look better in a list.

Multiplayer on some maps can be annoying. One of the Gold Rush maps, Harvest Day features infinitely respawning tanks that respawn instantly. It’s annoying if you are defending as very few people play as demo man. Also, there is very very very little splash damage to the point you would think there isn’t any at all. Respawns take forever in multiplayer.

All in all, you would game is pretty much standard from any other military combat game, right? Wrong. This ain’t a serious military shooter, but that doesn’t mean you won’t enjoy this game.

If you are thinking about purchasing the game, you might want to rent the game first or maybe play the demo. I rate it a 4.5/5.