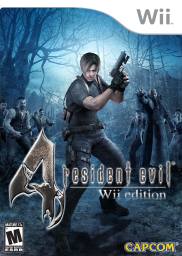 Resident Evil 4 was definitely the odd one out of the (fantastic) series. The over-the-shoulder perspective, an Umbrella-less plot, and more action-based game made for a completely new- and chilling- experience.

Released in early June, Resident Evil 4: Wii Edition was practically a direct port from the PlayStation 2- only better. It took the best of both worlds; the exclusive PS2 content and the superb GameCube graphics were meshed together to create the ultimate Resident Evil 4 experience. The control setup was fantastic very intuitive, and most of all, what you would expect. Controlling the shooting reticle with the Wiimote, moving with the Nunchuk..it all pieced together perfectly. All of this combined with the original terrifying RE4 story and gameplay puts Resident Evil 4: Wii Edition as the sixth best game of 2007.

If you’d like to know more about the game, you can read my review on it.