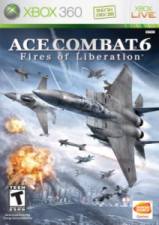 Another Namco/Bandai game on the list that escaped the clutches of the Sony consoles is Ace Combat 6. Yes, Ace Combat. That series where you fly around in the most coolest jets and fire a ton of rockets. Yes. That game. You might criticize me for saying this, but this game beats a lot of others to the spot of #8. Why? Because it just does.

I am normally not a fan of Flying simulator games or whatever flying games genera go in, but this is an exception. It allows you to play with easy controls on any difficulty setting. So those who can’t fly planes will have an easier time playing. Finally.

While the game’s story has its cheesy moments, it makes up in graphics, gameplay and levels. The graphics, which you would think would have the quality of Google Earth due to the mention of the Imaging technology used, aren’t that bad at all. In fact, they are better then any aerial map I’ve seen. The explosion effects are done well, and it’s so awesome when you blast an airplane just 2 feet in front of you and fly through the debris that ensues. The levels are awesome with realistic weather and changing fight patterns, so most of the levels, the enemies don’t fight the same way. The game itself is just spectacular. And I really think it’s deserving of #8 on the list.