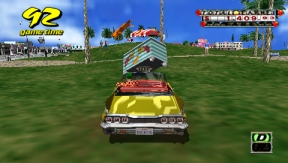 Sorry for not keeping up to date recently, I have been really busy over the past week. Sega announced that the old classic arcade game, Crazy Taxi, will be having a new game for the PSP. The game, which is called Crazy Taxi: Fare Wars. The game will be going back to it’s roots by using the old game world. We at GameSpotting! love Crazy Taxi, and while it can get overly repetitive, it sometimes cannot be avoided. Sega hasn’t given much more on the details of the game, but by the looks of it, it could just be a direct port. Also, the old Hitmaker (makers of the old game) have not signed on to do development but another company called Sniper Studios is set to do development.