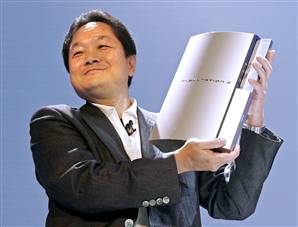 After making the ridiculously huge waffle iron (sorry fanboys) called the PS3, Ken Kutaragi (who was the chairman and a chief executive of Sony Computer Entertainment) left Sony today. He announced that he would be leaving last April, and has officially left the company. This doesn’t mean the PS3 will stop being developed, as he left his two year plan for the PS3 (which might hint that there will be a PS4 in two years [though we doubt it]).

In a final phrase that will kill almost any PS3 fanboy, Kutaragi stated that the future of the PS3 relies on Online Gaming and the Internet (not gaming titles? or price? or design? [hmmm…]). Sorry guys.