This is more centered around the Wii Version than the GCN version. It’s kinda funny that the game abbreviated is LOZ:TP which could mean a lot of things…like Legend of Zelda: Toilet Paper or Legend of Zelda: Tape Paper or…um..I don’t know. Everyone knows who Link is however like every other LOZ game Link is different, this one is raised as a wrangler in a small, rural village (which tends to be the place link is always in), is “sent” to throw a gift at the royal family of pantsville Hyrule. But as he is about to leave the story line gets really dramatic…oh no…5 bucks Zelda gets kidnapped or harmed in some way. And the village is very nice. I think I will clean it up (okay fine he doesn’t clean the village), 5 hours later, the village explodes (which it does explode). Wow…that sucks. Link goes flying into a dark twilight shadow that has covered Hyrule. 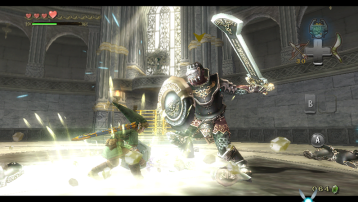 When he enters that realm, he transforms into a wolf and is captured. A mysterious figure named Midna helps him break free. With the aid of her magic, they set off to free the land from the shadows. Oooo…and that’s the basic story. The WiiMote and the Nunchuck both control the sword movement when used together and arrows are controlled by the WiiMote individually.