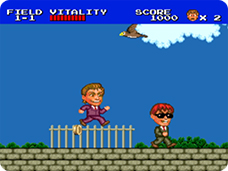 UPDATE: Hudson Soft just changed the release date for World Sports Competition to the week after (or so we assume). Instead we will be getting J.J. & Jeff (WHY!?! That game sucks! I mean, if you wanna see how stupid it is, just look to the left) for 600 points this week. Thanks a lot for screwing with our minds, Hudson Soft.

The following is nullified because of Hudson Soft:

Our wonderful friends at Hudson Soft just “happened” to release a date very quietly about the next Virtual Console game.

World Sports Competition for the TurboGrafx-16 will release this coming Wednesday. The game will cost 800 points. Now by doing some “undercover work“, we found that it is most likely that this week’s theme is not sports.

We do have reason to believe that this Monday’s game might be PilotWings (more likely this) or Zombies Ate My Neighbors (both for the SNES).

Please note that this is semi-pure speculation, as the ESRB (wanna do your own search? just type in a name at ESRB and select Wii as your console, if the game doesn’t show up, then it’s not releasing soon) has just put this up under the Wii Ratings section (which it normally does before software is planned to be released).

There is a 20% chance Paper Mario for the N64 (based on an article from Nintendo Power for this month [it stated Paper Mario was coming soon]) will release. It’s more likely Paper Mario will release at the same time as Zelda II: The Adventure of Link.

Now because the game has switched, Nintendo might have a different theme, which is probably going to be partnership (or classic arcade like games). And if that is the case, TMNT will release this week (or so we think).

Technically, Nintendo tends to release one “popular” game with a series. And it needs to make up for this new crap video game it has offered us. If we follow the rule above about the ESRB, that would leave us with:

Crossed out means less likely to happen based upon data from previous weeks and certain other sources. We can’t tell the future, only guess.