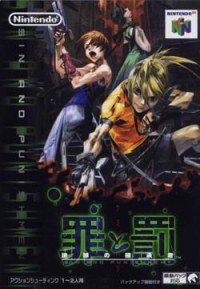 Nintendo has imported this week’s Virtual Console games (and seriously over-charged one [thus breaking their regular pricing methods]. Geez). So people waiting for Super Mario Bros: The Lost Levels can sleep soundly tonight ’cause Nintendo “imported” this title from Japan.

The other title, which was originally announced for America (very very quietly in a copy of Nintendo Power [which 4 issues later disappeared from the charts only to appear in Japan]), is Sin & Punishment which is a highly requested one. Oddly, it’s also worth much much more than regular N64 games costing about 1200 points (those 200 extra points are probably due to the fact this game is pretty rare or it had to be translated). If you know anything about Sin & Punishment, you might remember that the game has English voice acting (and the Wii version still has that same Voice Acting). The game now has English menus (different from the old game where all text was in Japanese).

Super Mario Bros. The Lost Levels (NES , 1 player, rated E for Everyone, 600 Wii Points): Originally released in Japan as Super Mario Bros. 2, this game has previously made only brief cameo appearances in the Western Hemisphere. Now available on the Virtual Console in all of its original splendor, Mario fans will appreciate the familiar look and feel of the game, while finding that its updated game play creates an entirely new challenge. No longer content just to wear different-colored overalls, Mario and Luigi also possess different skill sets: Mario can stop quicker, while Luigi can jump higher. In addition to the classic enemies already known to fans worldwide, there are also Poison Mushrooms, backward Warp Zones, and the occasional wind gust (which can help or hinder your progress) to take into account. And if that’s somehow not enough, expert players can go looking for the game’s secret worlds. So get ready to put your Mario skills to the ultimate test, and save the Princess again. Just don’t be surprised if she’s in another castle.
Sin & Punishment (Nintendo 64, 1-2 players, rated T for Teen â€“ Blood, Fantasy Violence, Mild Language, 1,200 Wii Points): Created by the legendary development studio Treasure, this is a game that hard-core gamers and fans of Japanese imports recognize as one of the finest Nintendo 64 titles to have never previously reached North American shores. Its unique combination of English voice-overs with Japanese subtitles (preserved in this version) has only added to the enthusiasm for its eventual release here. Experience the frenetic pace of a classic shooter, while choosing from a variety of options and a number of different skill levels until you are ready to take on the full-blown challenge of Turbo Hard mode. Not to be outdone by the action, however, the intriguing story line gives the game its soul and draws you even further into the mix. Set in the near future, on an overpopulated Earth starved for resources, players uncover the intriguing mystery of two teenagers (Saki and Airan) and their battle against the Ruffians as they advance through level after level of nonstop action. Take a deep breath, gather your energy and prepare to see why this game is so highly praised.