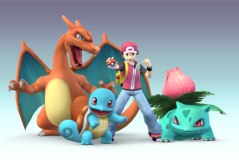 From today’s update, we learn the newest character in Brawl is a Pokemon trainer. The Pokemon Trainer is a somewhat odd character as he stays on the sidelines (you can’t kill him) rather than in the fray unlike other brawl characters. He has the ability to fight with 3 Pokemon; Squirtle, Ivysaur, and Charzard. Those Pokemon can be swapped out at any time, but they all use the same health meter. The rotation order of Pokemon goes in the order above with Charzard going back to Squirtle. While playing as the Pokemon Trainer has it’s advantages, it also has a huge disadvantage. Pokemon have another stat called stamina, which you don’t want to diminish else you won’t be able to fight with that Pokemon.

Another hint given was: “If you keep fighting with the same PokÃ©mon, or if you change them out too often, it’s not so good for the PokÃ©mon.”