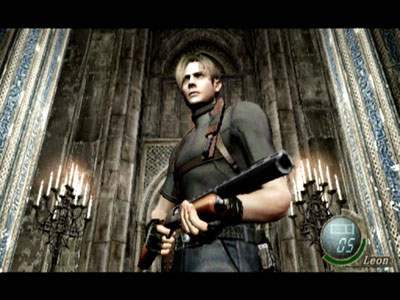 Resident Evil 4 Wii Edition is a mix of the two (excluding the PC game) versions of RE4, combining the PS2’s extra weapons and modes and Gamecube’s stellar graphics, now adding the controls of the Wii. The original game for the Gamecube- which was easily in the Top 5 greatest games to ever grace Nintendo’s fourth-gen console- now ported to the Wii, can it live up to its name? The story is identical to the previous edition, with the 27-year-old special-op/secret service agent Leon Kennedy being sent by the US government to rescue Ashley Graham, the President’s daughter, who was taken by a religious cult in a remote, Spanish-speaking village somewhere in Europe. When he arrives, there’s something amiss with the villagers, and as you go deeper into the plot, you find out what the cult, Los Illuminados, is really about. The gameplay is almost exactly the same as the first version, but that’s because this edition is a port with a few changes.

Unlike a lot of other game ports, the controls don’t just feel “tacked-on” (except for one part- more on that later), but seem fluid and perfectly tailored for the system. You hold the trigger button, B, to pull out your equipped weapon, and move your cursor around by moving around the Wiimote. While in “gun mode” (holding down the trigger), you can do a couple of things: you can push A to fire, or hold it down if you have an automatic weapon, or you can flick the Wiimote (or push a D-Pad direction) to reload your weapon (if you finish a round and try to shoot, it auto-reloads). When in standard mode, the nunchuk is used to navigate, you hold Z to run, hold C to pull out your knife (push A to swing), and you can shake the Wiimote to auto-swing your knife, and it’ll aim at the nearest box or barrel for you. An interesting note is that whenever you need to zoom in (weapons with scopes), you only use the nunchuk’s analog, Z, and C buttons to move and zoom.

The graphics are awesome, and probably one of the best-looking games on the Wii, though it’s nearly 100% identical to the Gamecube version. There is almost no noticible graphical difference between the two versions, and it’s fantastic anyway. Now with all survival-horror games, sound is a very important part of the game, as it sets the mood. When you’re walking down a dark, candle-lit hall, you need just the perfect music in the background, and Resident Evil 4 does this quite well. When slowly walking across a dark room filled with all sorts of electrical machinery, the only sound is the soft pitter-patter of your footsteps, and the distant humming of a generator. When an onslaught of enemies come after you, dark, orchestral music kicks which usually flicks on the “oh crap, better run” switch in your head.

Now, even if this game is flat-out awesome, no game is perfect. There are some unavoidable issues with the Wii’s control scheme, like my hand getting tired of holding the controller out in front of me for too long, but if I don’t aim like that, the aiming reticle gets glitchy. The controls to skip the cutscenes are really annoying, too. 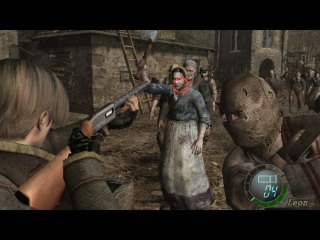 Instead of L+R like in the GCN version, it requires you to shake the Wiimote like there’s no tomorrow. Even with those small blemishes, this game is about as close to perfection as you can get. The story grips you throughout, the graphics are stellar, new controls, the eerie noises; it all comes together to make a great port, well-worth its price of $29.99.

Now, how about we get to the ratings?

Sound: 9.5/10 -The sound does an excellent job of setting the haunting mood that goes along with the genre- not to mention the dialogue is great and funny

Graphics: 9.5/10 -Probably the best the Wii can muster (right now); near 360-quality, and just simply awesome

Difficulty: 8/10 -Unfortunately, this game is a little on the easy side. Even the scariest things in the game can be defeated pretty easily, and most boss battles don’t even require a second try.

Story: 10/10 -The story is great. There are twists and turns all throughout the game- I don’t want to say much more, as not to spoil it, but it’s one of the best stories I’ve ever seen in a game, if not the best (except for the whole “President’s daughter” thing…).

Controls: 8.8/10 -Now, the controls are great, don’t get me wrong- it adds an element of realism to the game, which is welcomed- but there are definitely some things wrong with them. The “Wiimote shaking” seems tacked-on and annoying, and the aiming can wear out your arm. The controls aren’t so bad that you won’t like them, they just take some adjusting to.

Playback: 9/10 -I’ve played through the game eight times, and I’m on the ninth right now. It’s not everyday you’ll find a game that has great replay value just from the single-player, but this is definitely one of them. Once you beat the game, you unlock three different modes (all of which are great, albeit short) and can replay the game again with all of your weapons, which is also great.

Overall Score: 9.5/10 -Overall, the great graphics, story, and replay value put this as one of the Wii’s best games yet, even with some of the small control problems. For only $29.99, this game’s practically a steal- you’d be crazy not to go out and buy it!