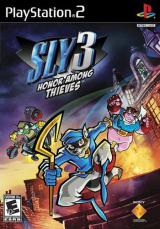 Considering that Sly3 has came out and that I am a fan of the Sly series (yeah I know). I couldn’t wait to play this game. Which is really good game. Once again you play as sly who once again has to pull off a major feat of stealing something. This time it’s Sly’s family vault. But in order to do this he has the “bad guy” (police officer who sounds like a bad guy) join his team. Which is really desprate attempt by the people at sucker punch. I think the most major change that was made to Sly 3 was the introduction of 3D. With each retail copy of the game comes a pair of 3D glasses inside the manual, which you can cut out and use whenever the game calls for it. The 3D sequences in the standard playthrough are few and far between, and each time you encounter a 3D level, the glasses are vaguely incorporated into the story. For example, in one instance, you’re heading into a dark cave and are told that you can use optical enhancers to see more clearly (even the characters inside the game can be seen wearing them). However, it’s entirely optional, because before each sequence you’re prompted with an option to play in 3D or not. The game is really fun and very enjoyable. But however is not as great as Sly 2. I like the feel of control from Sly 2 better then Sly 3. And the story is better played out in Sly 2