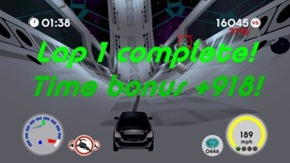 A while ago this game was announced, and about 2 days ago the Yaris game was released to the Xbox Live Arcade (but I couldn’t find it until earlier today). The game isn’t really the best thing I have ever played. It’s style would have been acceptable around 6 or 7 years ago, but probably not now. An interesting play on racing, the Yaris game is something of a rail-shooter with cars. But this doesn’t mean it is automatically the coolest game in the world. I would say that this might be near the bottom of the barrel of Xbox Live Arcade games (I have seen better free XBLA games [Aegis Wing]). Yaris is basically a playable advertisement for the Toyota Yaris.

The car basically auto accelerates (according to the controls, pushing in any direction on the left stick will cause the car to go [but I found that it moves by itself]) rather giving control to the player. Which would be nice, so that you could get all the enemies behind you in front of you so you could shoot them. The text is normally really big (and oddly on any confirmation dialog the text is really small) and doesn’t give a very cool feel to it.

Anyways, Yaris doesn’t have a good multiplayer system. In order to start a game you have to wait 5 minutes until the room is full (who is gonna wait 5 minutes?). The menus are a bit slow and some of the tracks have dull colors. Enemies on the track will tend to popout out of nowhere, and damage you from behind (which can get annoying). However, the tracks are very big with lots of crazy roads you would think be in stunt track racer.

What Yaris does have is an upbeat techno soundtrack, nothing much to complain about there. Unfortunately, Yaris will give you maybe 5-10 minutes of fun, but not much else. But what can I say, it’s free right?