Remember Me is a game about the world having the worst case of amnesia. In the future, mankind has created a way for people to store and contain memories that they either don’t want to have or want to keep forever. It’s called the H3O network, and everyone is tapped into it via their mind implants called the sensen.

If this sounds remotely familiar to some degree, that’s because you’re dead on. Remember Me borrows the digitized world from Watch Dogs, the neural technology interface system from H3 the Digital Series, sprinkled with a dash of human ethics issues from the Metal Gear Solid universe, and the Matrix from the Matrix.

Mostly unoriginal story aside, the game has an otherwise great concept. Tap into people’s minds and manipulate their memories to your will. Sound neat? GUESS WHAT IT’S NOT. Even though this is THE MAIN MECHANIC OF THE GAME and IT’S ON THE FUCKING BOX, you perform this ability a total of six times (and two of those times are debatable). The control system for changing people’s memories is absolute trash. Worst off, it’s arguably the most buggy part of the entire game! This is the sole point of this game, and it controls like flaming ass!

While that’s a bit of a downer, maybe the rest of the package can pull it together? The graphics are drop dead gorgeous. The art style, level geometry, lighting and design tone really bring the piece together. I was quite amazed at the fact there was extremely minimal asset re-usage. 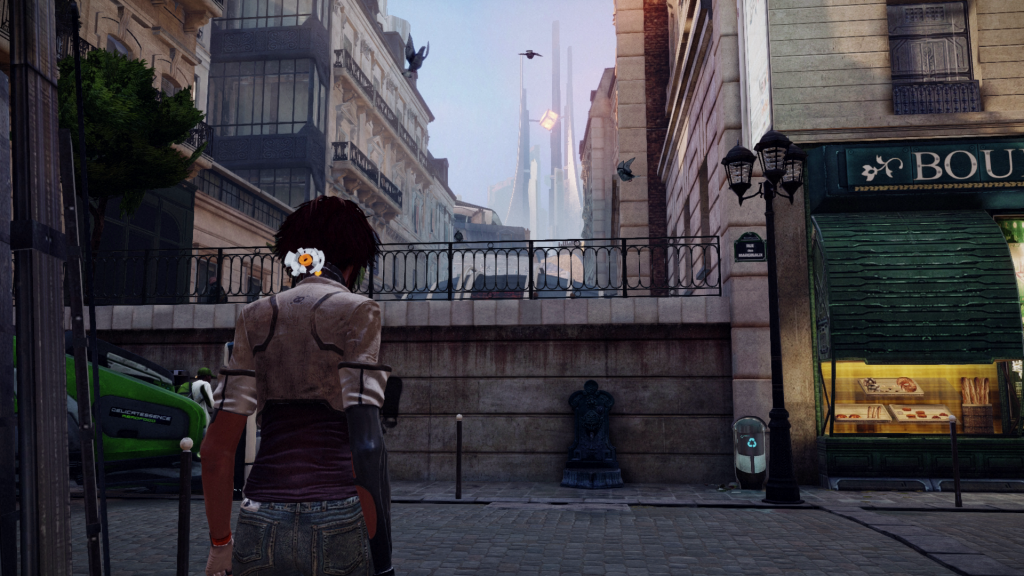 If anything, I must mention the soundtrack for Remember Me, because dear god the music is WONDERFUL. Normally I hate the usage of dubstep in anything, but this is an exception, one I do not make lightly.

The mix of electronic, dubstep and orchestral just works out so well for this game. Words cannot describe how much I enjoyed the musical masterpiece found in Remember Me.

Remember Me rips off a lot of the implementations of game mechanics from other successful games, the biggest being the platforming from Prince of Persia and Assassin’s Creed. It’s recreated rather well when the engine wants to work. Yet, I consistently ran into problems with the engine forgetting how to climb up onto ledges or not displaying the waypoint interaction marker, leaving the player stuck for ten minutes waiting for the game to catch up.

Combat in this game is a bit floppy and it’s obvious that the developers wanted to implement a system that would rival the ones found in the latest Batman titles by Rocksteady. To subvert comparisons between the two games, Remember Me introduces a combo system where you design what each predetermined button sequence accomplishes.

Neat idea, but the developers failed to see that NO ONE LIKES PAUSING IN THE MIDDLE OF COMBAT. In addition, I would assume that PEOPLE DON’T REMAPPING THEIR BUTTONS DURING EVERY BATTLE.

Sure, it’s just a predetermined button sequence, but the method of changing what each button does is really just control configuration mixed with inventory management.

And most of the time, you will be paying attention to the bottom of the screen at all times in order to see what combo the game is thinking you are about to do, since sometimes it gets stuck. Because of this, combat gets extremely monotonous later on in the game, even more so with the addition of cooldown timers for the specific enemies that require special moves to defeat.

But that sounds like it could be mastered, right? Not if the game allows them to teleport around the screen and throws several of them at you at once! Oh and the cooldown is 140 seconds on average (and you can’t hit these guys without taking damage cause they are on fire).