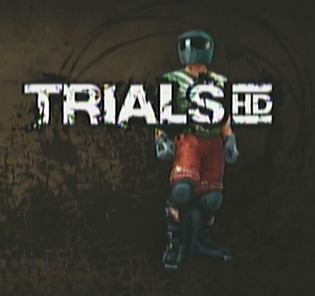 In the amazing event that is me updating this website (I’m planning on revamping this site sometime), I will be reviewing a game that is no where near my satisfaction, Trials HD.

Now before you leave thinking: “Golly, I can’t believe he’s actually updating this blog with more flame posts”, hear where I’m coming from.

Trials HD at its core is a great concept. The first levels are fun and challenging and leave you with the feeling that you might be playing a good game. Not good enough to buy, but something to pick up when you are bored.

“Crawling in my skin”

When I first tried out the trial to Trials HD, I felt like the game was a bit silly. It felt like it was trying to be hardcore but wasn’t really at that level. It’s only when you actually get the game you realize how bad Trials HD wants to be extreme.

On the first few levels I loved how I would go flying in the air, hit a wall and a big cartoony “Crash!” would appear on my screen. It was loads of fun. But then Trials HD started to listen to emo punk music and gave me this odd feeling that Trials HD didn’t like players.

And it wasn’t until the Medium difficulty levels that it became apparent that Trials HD HATES YOU. Not only does it hate you, but it really hates you. It giggles at slashing your car tires every morning, stealing your newspaper, breaking everything you’ve ever owned and so much more. Trials HD is dedicated to making your life miserable.

The game expects that you can magically foresee the future and change the outcome of a jump (of which the outcome is always you dying [and sometimes it will kill you anyways]). And unless you have the reaction time of Jesus, you will fail. Trials HD loves to make you backflip and die. Hitting anything will cause your bike to go ballistic and backflip into the air, no matter how small of an object that might be. Basically, the game knows you are doomed and makes fun of you for it.

If real life bikes handle the way they do in Trials HD, then God must really like Evel Knievel.

Levels are designed to keep things fresh, showing the player all the different ways they suck. Now, I don’t consider myself bad at games. I am or used to be in the top rankings in the Battlefield games and I very very very rarely lose at Burnout games (which requires that you can react extremely quick). But to be good at Trials HD must mean that you are #1 MLG whatever competitive competition thing that people with no lives do.

I really enjoy the level design and the cool little features in each one, but the levels really boil down to tons of button and stick mashing and a bunch of curse words. 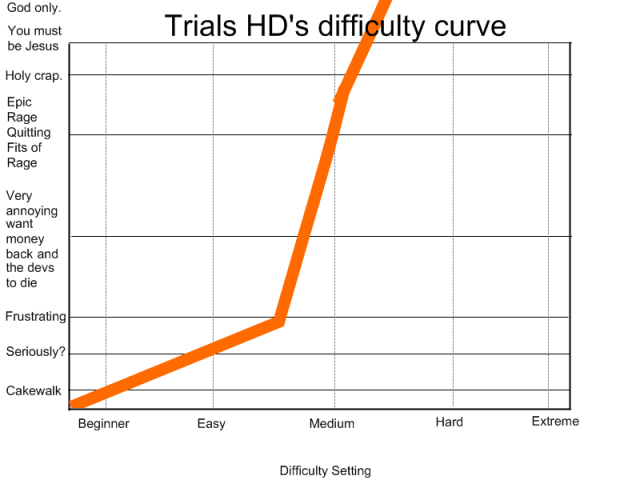 I didn’t play any of the tournaments because after I tried to beat the second level in the Extreme category, I just gave up. In the second level, you have to drive backwards, but the problem is that you also need to drive forwards in order to gain speed by going backwards and not to crash. Plus, LT is the button for brake and reverse, so you can imagine all the fun that will ensue! Also, if you fail by a centimeter, you fall into a pit of atomic bombs. Oh joy.

The level creation system is cool and I think it would be awesome to make some tracks if you actually wanted to spend the time to do so. The community sharing system is horrible. I mean, you can only share maps you make with friends, which is too bad because no one on my friend’s list is insane enough to go buy this (except for other reviewers like myself). Kodu, a game I plan to review next, came up with the clever idea of making 3 gamertags that are basically, the community’s file servers. Why Trials HD developers didn’t think of this, I don’t know. But they really should have.

I’m happy I got it for free because there is no way on earth I would ever pay for this game. Ever. I suggest other people stay very very very very far away from it.

If you put BMX, Tony Hawk’s Project 8, the daytime levels of Sonic Unleashed, Paperboy and the extreme unresponsiveness of the physics engine in Mirror’s Edge in a blender you would get: BTYPWQUNSONCIWQLKAPYREMXOYGE, and also Trials HD. 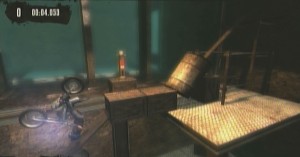 The only people you will ever see that continue to play this game are the ones that are trying to get all the EXTREMELY DIFFICULT achievements or ones that will continue to play the Easy levels. In fact, there is no point to playing the Hard or Extreme difficulties. Save yourself the trouble.

Verdict: Don’t buy. Trials HD is fun to play with if you can ignore the horrible controls and the constant gloating of how much you suck. But if you are like any average human, you will avoid failure or at least try to avoid failure. So why don’t you just help yourself and avoid Trials HD.